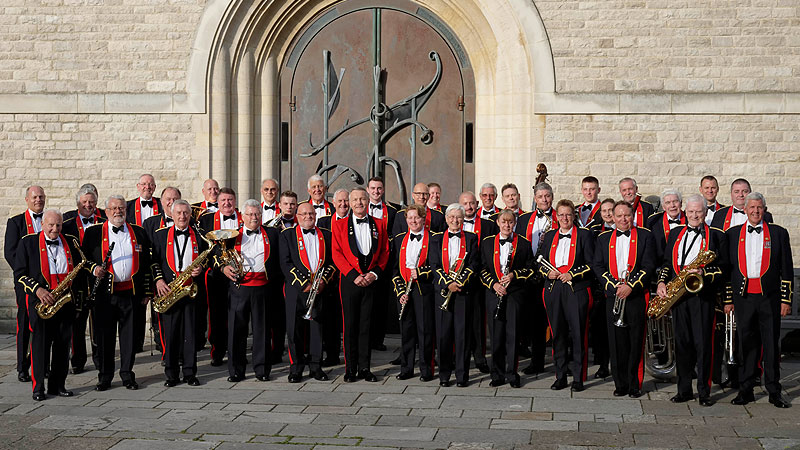 We are often asked questions about the Royal Marines Association Concert Band. For example, when did it start and how? Who are the members?

The Royal Marines Association Concert Band is a concert band of around 50 musicians. We are committed to providing the highest standard of performance and musical excellence. Our aim is always to thrill audiences the length and breadth of the country, just as Royal Marines Bands have done for over a century.

The Band members are former Royal Marines Musicians as well as further members of the Corps family, musicians from other Services, invited professional and experienced civilians. We rehearse every Thursday evening in purpose-built, fully-equipped rehearsal rooms at HMS Collingwood, Fareham.

We’re all extremely proud to wear the Royal Marines uniform. Between us we have well over 1,500 years of accumulated experience in the music business and importantly, no shortage of enthusiasm!

So how did it all start? For the full story, read on...

Various attempts had been made over the past three or four decades to form a band comprising former Royal Marines musicians, but other than the Royal Marines ‘All Stars’ which forms for one annual concert only, somewhat surprisingly, nothing permanent developed.

However, in May 2004 Major Paddy Dunn RM, the then Royal Marines Association Chairman (and son of one of the Royal Marines Band Service's most famous Principal Directors of Music, Lt Col Sir F Vivian Dunn KCVO OBE FRSA RM) took the decisive step.

Paddy called the Royal Marines Association President, Brigadier Simon Hill and announced: “We’re going to form a band!” Somewhat taken aback, but catching Paddy’s enthusiasm, Brigadier Hill replied: “Fine, so let’s get on with it then!”

By then ‘word’ had seeped around the Portsmouth based former RM ‘Bandy’ grapevine and in May 2006 the first gathering was held at HMS Excellent Whale Island. 30 former RM musicians turned up – to both Paddy and Ted’s delight and considerable relief – and the plan for the Band was explained. On 29th June the first rehearsal was held in the somewhat confined space of the conference room in Director Royal Marines building and about 35 musicians responded to the first downbeat of Ted’s baton with Kenneth Alford’s “On the Quarter Deck.”

Progress was swift and by September that year Ted felt that the Band was sufficiently competent to appear in public for the first time and they duly travelled to Lympstone Devon to play at the RMA Annual Reunion, wearing white shirts and Corps ties as the uniforms had yet to be delivered from the manufacturers ! By January the Band recorded its first CD ‘Once A Marine…..’, a tribute to the Corps’ widely recognised strapline, ‘Once a Marine, always a Marine’.

As word about the Band’s initial success spread, its membership grew rapidly and in early 2007 it was decided to move to the palatial 19th century surroundings of the Royal Marines Museum at Eastney which then became the Band’s permanent home (and undoubtedly the world’s finest band room!).

We remain indebted to the Museum’s Trustees for this considerable help, and similarly to the then Director, Chris Newbery, and his staff. (His successor is now Bob Bruce who is equally as supportive, being a former RM Officer of course!)

Whilst our aim is to raise funds for the Royal Marines Charity, the Band is self-financing, so we rely as much on the goodwill of our members as on fee income from concerts. The first fee-paying concert was held at the Station Theatre, Hayling Island on Saturday 17th February 2007 and since then the Band has been fulfilling engagements on a roughly once-a-month basis. Early highlights included playing at the Falklands 25 Commemoration event at Lancaster House in London – this is the first building on the Mall adjacent to Buckingham Palace; and at the Torrevieja Music Festival on the Costa Blanca in Spain, as the UK representative band. Numerous other successes followed – these are described in detail in the Band’s twice yearly newsletters – and today the Band, now over 60 members strong, undertakes a demanding schedule of engagements stretching into the future.

Finally, we owe an enormous debt of gratitude to the late Major Paddy Dunn for his foresight in forming the Band and both he and Ted Whealing for all their hard work in its initial formation.

This website uses cookies to improve your experience while you navigate through the website. Out of these cookies, the cookies that are categorized as necessary are stored on your browser as they are essential for the working of basic functionalities of the website. We also use third-party cookies that help us analyze and understand how you use this website. These cookies will be stored in your browser only with your consent. You also have the option to opt-out of these cookies. But opting out of some of these cookies may have an effect on your browsing experience.
Necessary Always Enabled
Necessary cookies are absolutely essential for the website to function properly. This category only includes cookies that ensures basic functionalities and security features of the website. These cookies do not store any personal information.
Non-necessary
Any cookies that may not be particularly necessary for the website to function and is used specifically to collect user personal data via analytics, ads, other embedded contents are termed as non-necessary cookies. It is mandatory to procure user consent prior to running these cookies on your website.
SAVE & ACCEPT